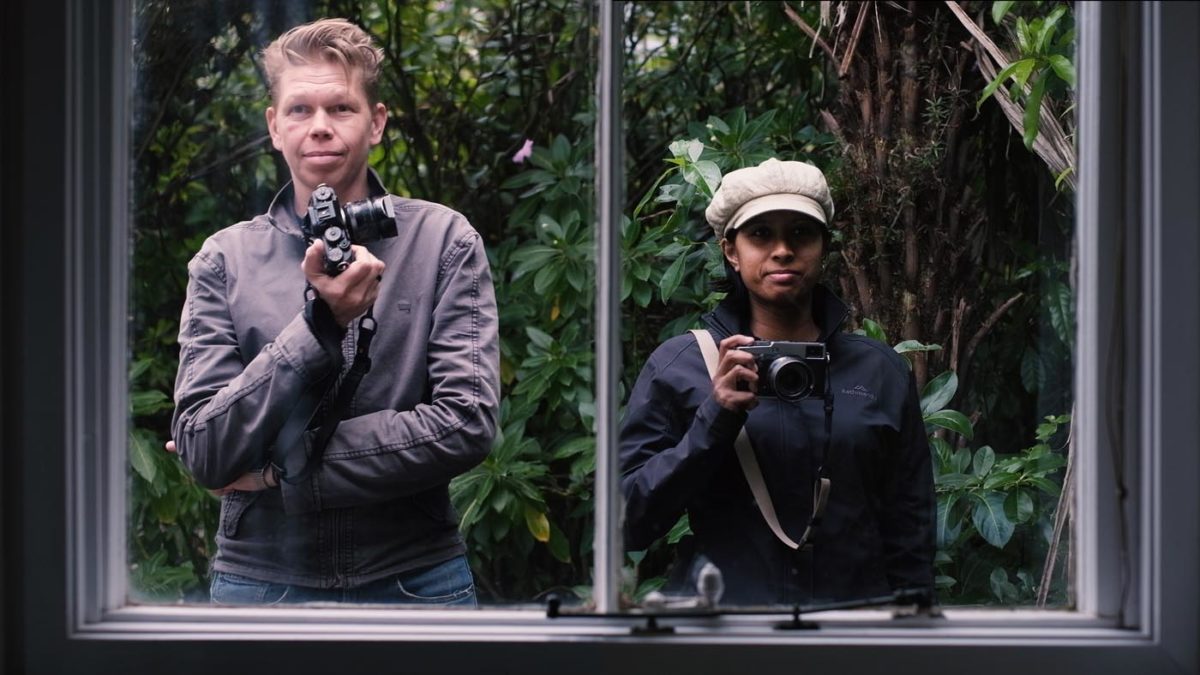 When Flemming and I were asked to make a movie about our individual choices in Fujifilm’s X Series cameras – the X-T2 and the X-Pro2 respectively – we thought, “ah, this will be a cinch.”

We’re both X-Photographers (Fujifilm’s name for its X series brand ambassadors) and have been using their respective flagship products for a few years now. Talk to either of us and we could tell you quite easily why, despite the technical similarities – both cameras share the same sensor and processing engine, so there’s no difference in output – we prefer one over the other.

Showing, though, is always different than telling. 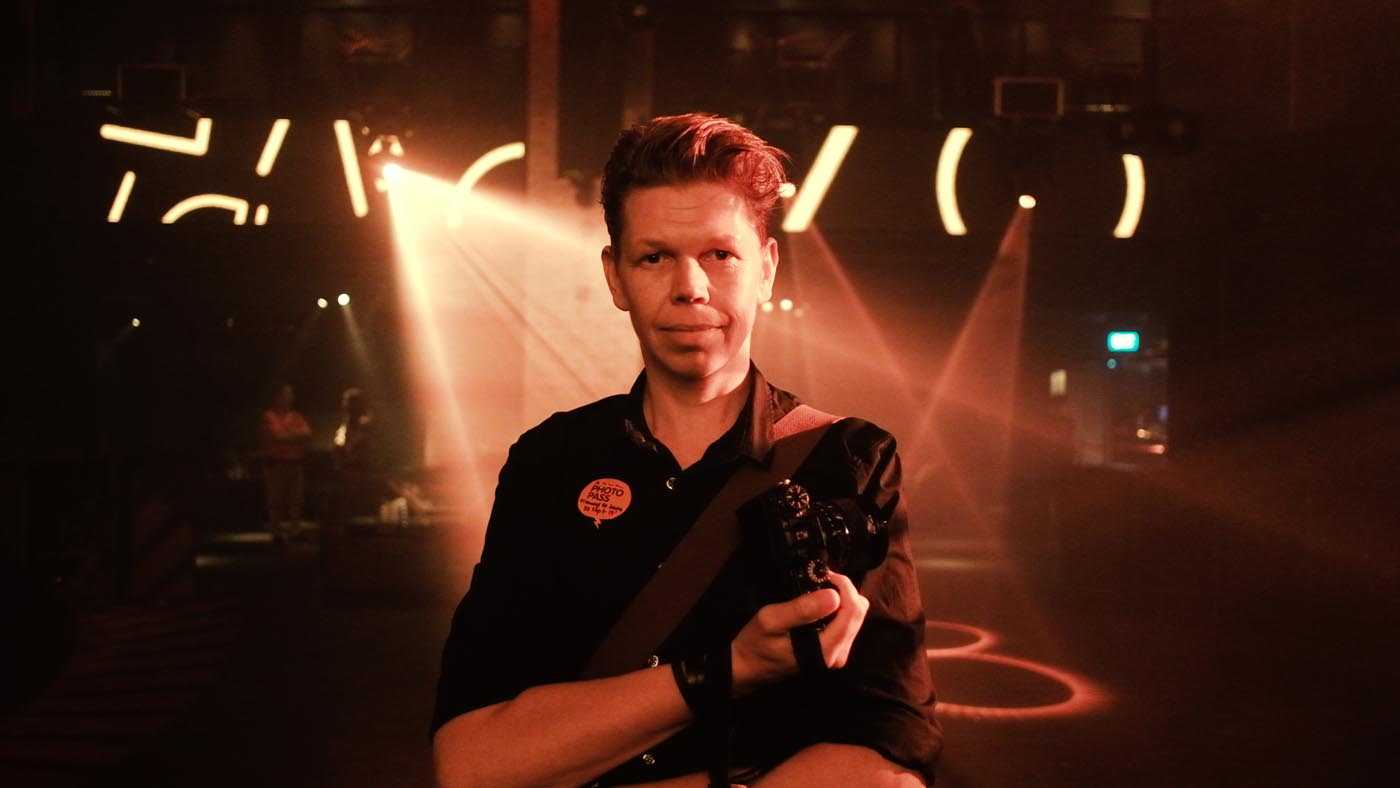 So, you have 2 cameras which are pretty similar, and 2 photographers who are pretty different. Flemming’s a put-me-on-an-epic-stage kinda guy and I want to be the Invisible Girl. There was no way we could contrast the two cameras in a similar setting because we work in different environments…. and we also had to film each other. 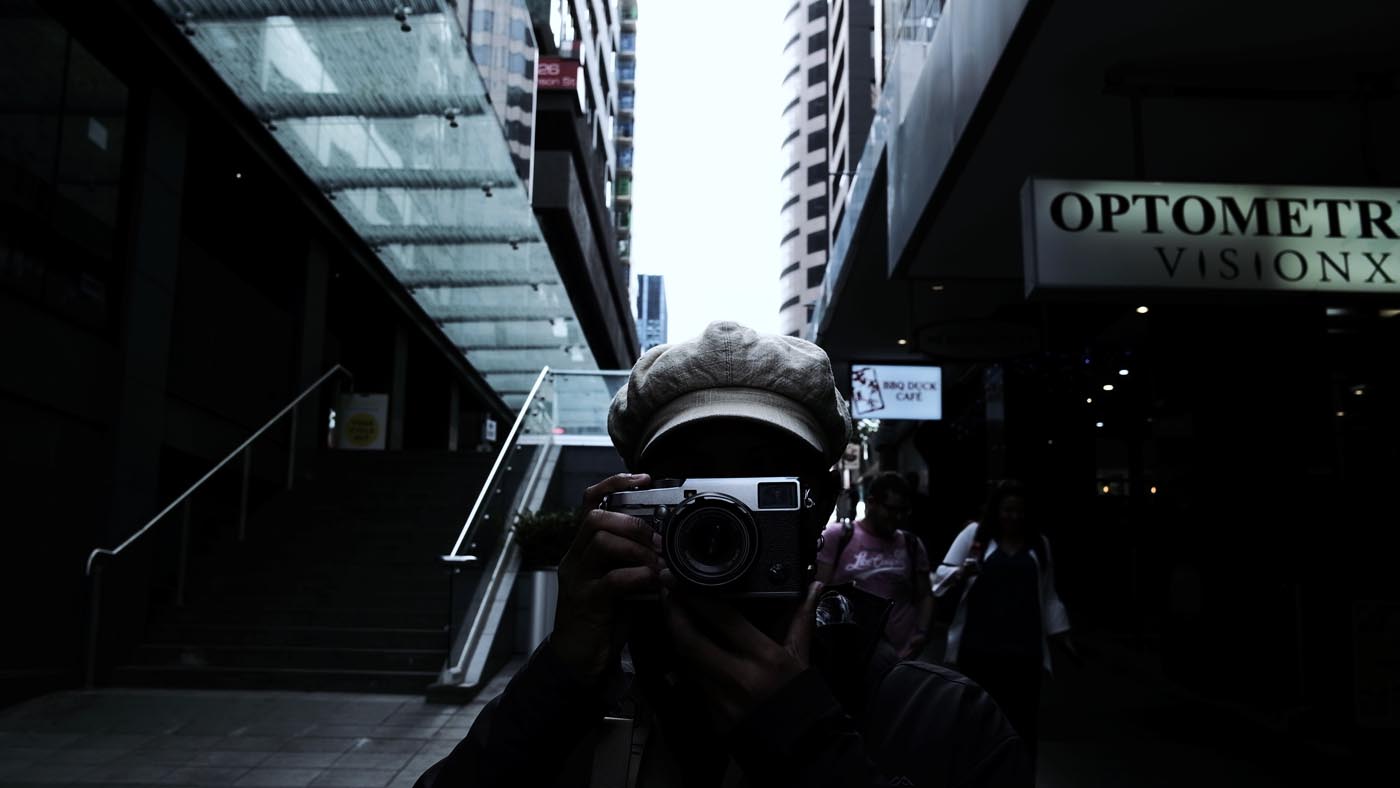 So we decided to run with the contrasts. Match each camera to its photographer and use setting and atmosphere to push the point – that for us, the dividing line between these cameras is about user experience, not tech spec. 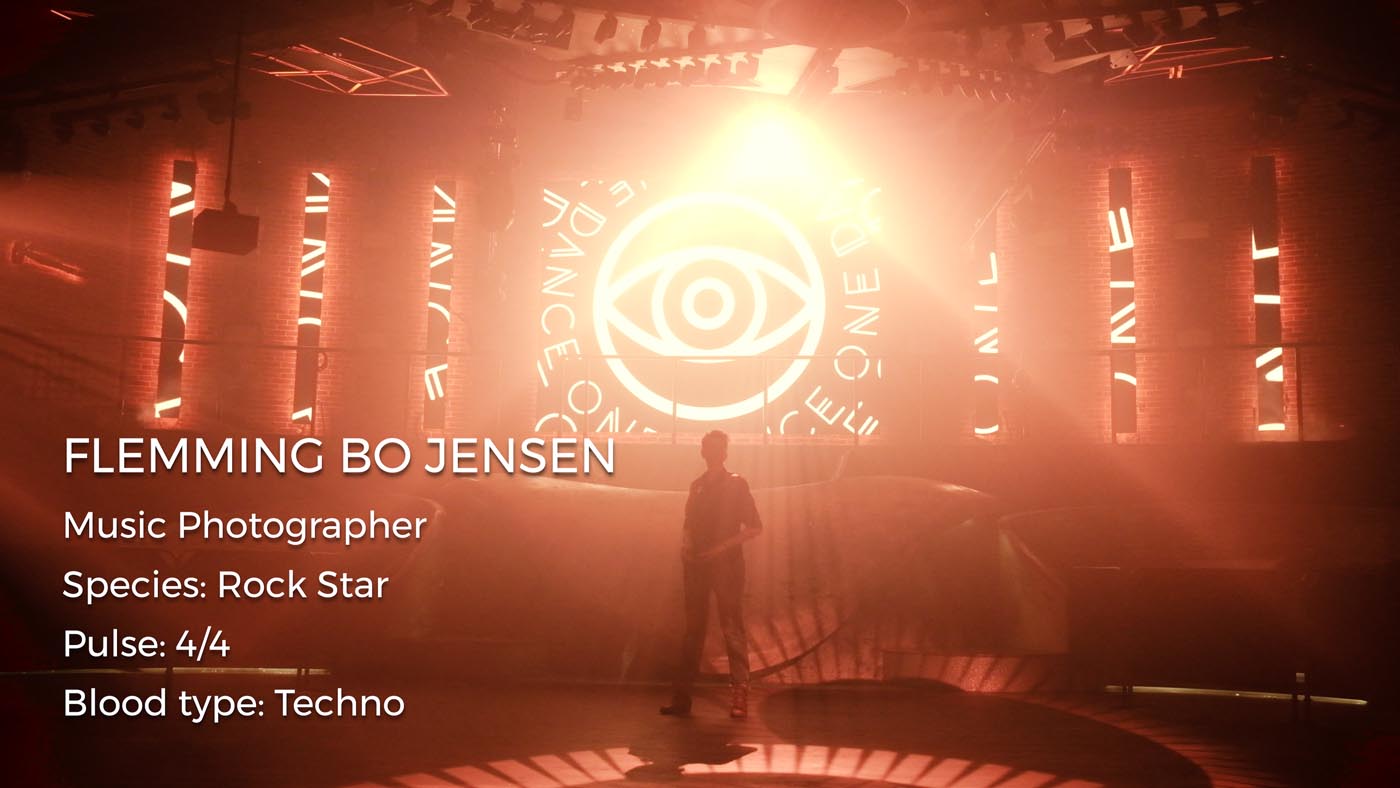 Our opposing personalities were the core of the movie concept, and consequently, our individual approach to pictures. The idea of player cards was thrown out right at the beginning, to make the whole video as much like a computer game as possible, with “vital statistics” relating to each “player” persona.

It was also agreed right at the beginning, that we should focus on similar aspects of each camera – the key differences about what each camera offered its respective photographer, wouldn’t be lost in the work type and environment.

Zouk Singapore kindly granted us permission to film on their premises for Flemming’s portion (thank you Zouk!), and he wanted his bit to a good overview of how he works in a club setting. Zouk is brighter than the typical dungeon-like clubs that Flemming shoots at in Copenhagen, but for filming purposes, it was perfect in scale and sheer epicness. 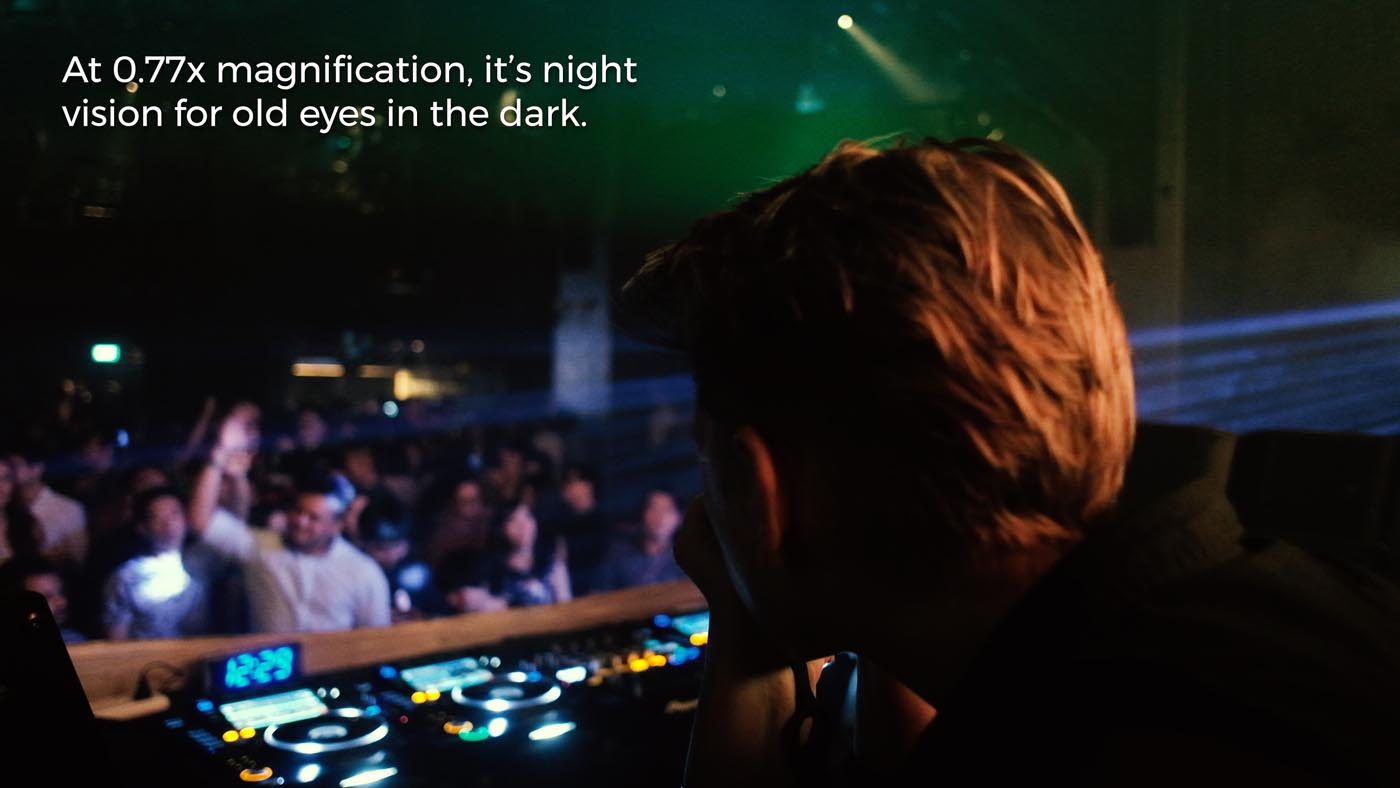 We were going to film my portion in downtown Singapore, but then the X-E3 movie came along and pushed that portion back, so it ended up happening in New Zealand instead. And at that point, fresh off the X-E3 production, I really didn’t want to be on camera – more than usual – so the ninja-in-shadows persona made it a little easier.

And the “silent movie” part? Well, we’ve done so many promo movies with a voiceover that we thought we’d challenge ourselves to really show our individual affinity for our chosen cameras without getting lazy with a voice over. With a movie this short, captions are way more limiting than voice overs, so we had to condense our points down to essence.

There were 3 locations in this movie:
1. Zouk Singapore – Flemming’s segments
2. The city of Auckland in New Zealand – my segments
3. Te Henga (Bethells Beach) in Auckland – for the intro and outro shootout scenes

Directorial duties usually rest on me and this was no different. The difficulty this time was two fold – I hadn’t been to the new Zouk (our 16-55mm promo was made in its original venue) or the city of Auckland, and I also had to direct myself in Auckland. With so many unknowns, planning was rough at best.

We had one night to film the Zouk segment, so on the appointed evening, we arrived right when they opened, and gave ourselves a couple of hours to adjust what plans there were to the practical limits of its layout. There were more strobes at peak time than I had anticipated, so it was good that we got there early, when the lighting was a little mellower (if you can ever use that word with Zouk), so footage wasn’t as interrupted by manic strobe bursts as it would have been later in the night. 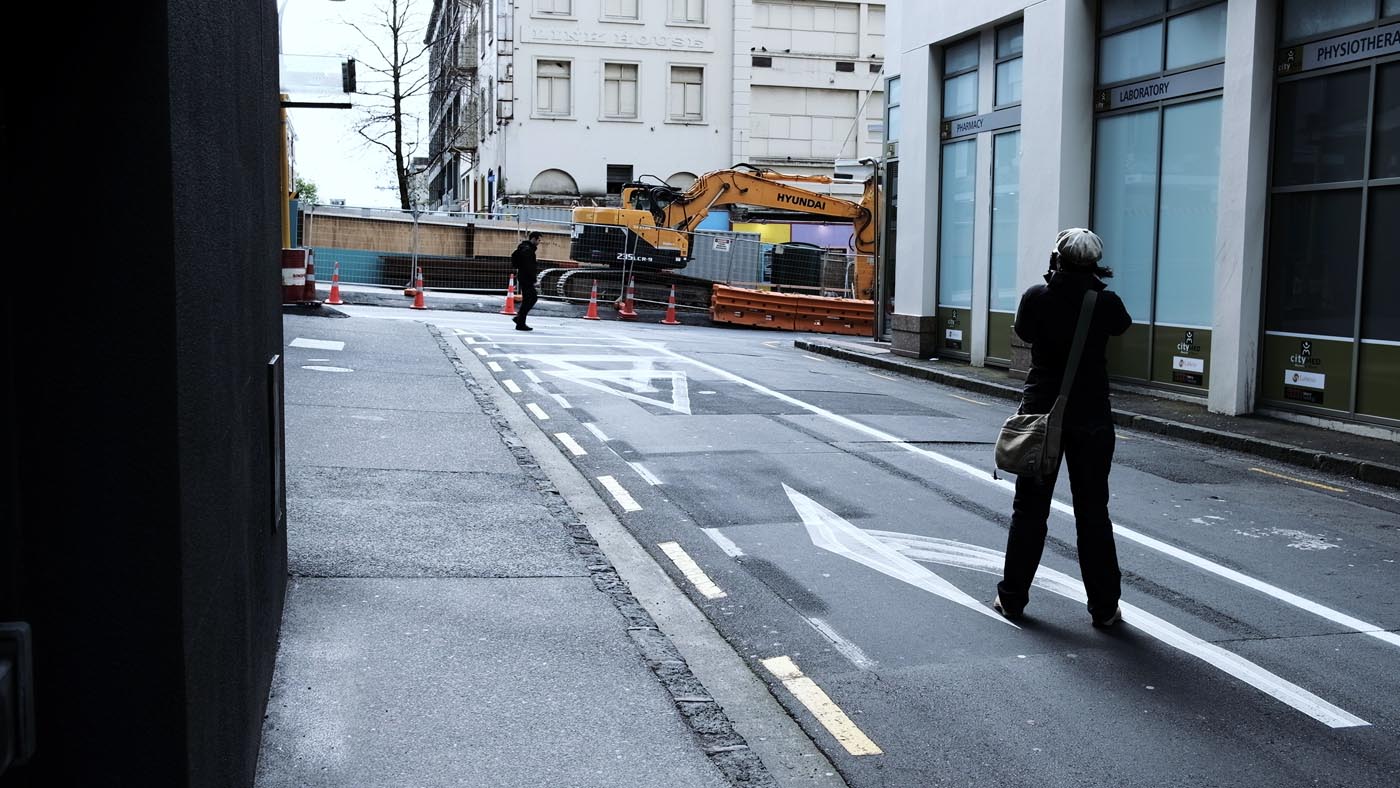 The Auckland segment was decided after a couple of days walking around the city in spring drizzle. As luck would have it, the days leading up to filming cleared and the appointed day of the shoot was clear and sunny. That was sheer luck. My segment turned out quite differently to what I had envisioned, but they did describe the feel and geometry of the city pretty well… and you don’t see my face much in it, which works for me!

The Bethells Beach scenes went off without a hitch, except for one thing – it was really windy on one of the filming days, and our tiny rig (we were filming with the little Fuji X-E3 and a light tripod) almost blew away, even with all our bags tying it down. There were many takes of each scene, the laughing got progressively worse with each take, so it’s a good thing the movie was meant to be silly!

What made filming generally efficient, despite our unfamiliarity with locations, was needing specific close up scenes to film with the cameras – buttons, screens and so on. We did those first in each of our segments, and then let those set the flow of the other scenes.

So what do I really think of it? 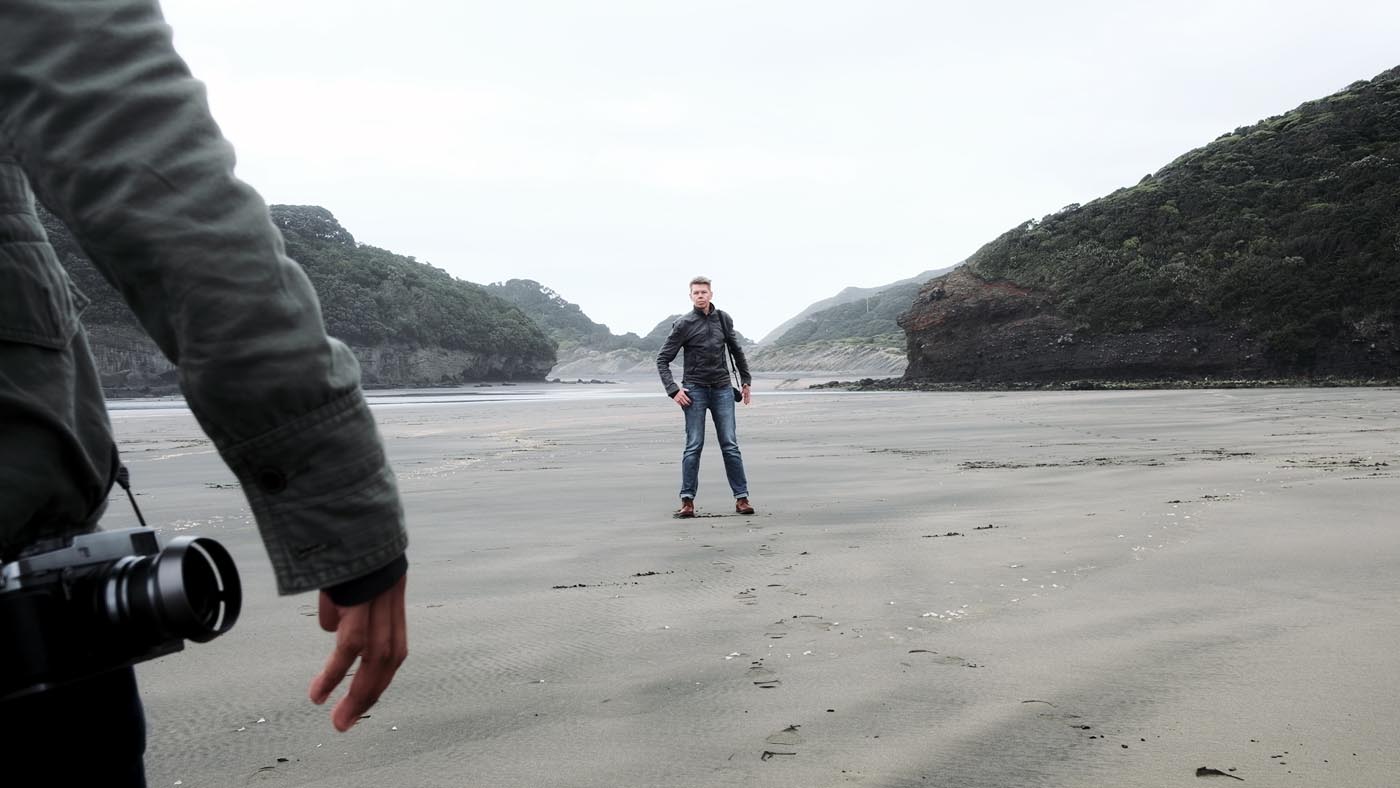 I wish it was better. I wanted it to be better. I wish we had had more time to get our scenes right, do several days of proper location scouting in each place, and had better light to work in. But this movie happened very far out of schedule, and we didn’t give our location planning the attention we should have. Lesson learned.

That being said, there are bits of it I’m really happy with – like the intro and outro “shoot out” scenes, for instance. We got to storyboard and block out those scenes, which they greatly benefited from. I’m pretty happy with the way Flemming’s segments turned out too – a nightclub isn’t the easiest setting to shoot in, but the camera made it easy, and Zouk is so spacious, with such a fun, civilized crowd, and accommodating staff, that it was easy to move around and do what I had to. I’m not entirely sure what my own segments are like – I dislike seeing myself on screen so much it’s physically uncomfortable, so you’ll have to tell me! But Flemming did some gorgeous camera work, so I am happy about that that.

On filming with the Fujifilm X-E3
We filmed the whole thing on the tiny little X-E3 (which I also shot a promo movie for).

I’ve already mentioned on my own blog, how much I’ve enjoyed filming with such a tiny camera. What I was really, really blown away by was its noise handling capability. I’ve written in detail about the video experience with this camera on my own blog, but I’d just like to reiterate how amazing it is to film at ISO 3200 and walk away with footage that looked good, and didn’t fall apart when lightly color corrected. 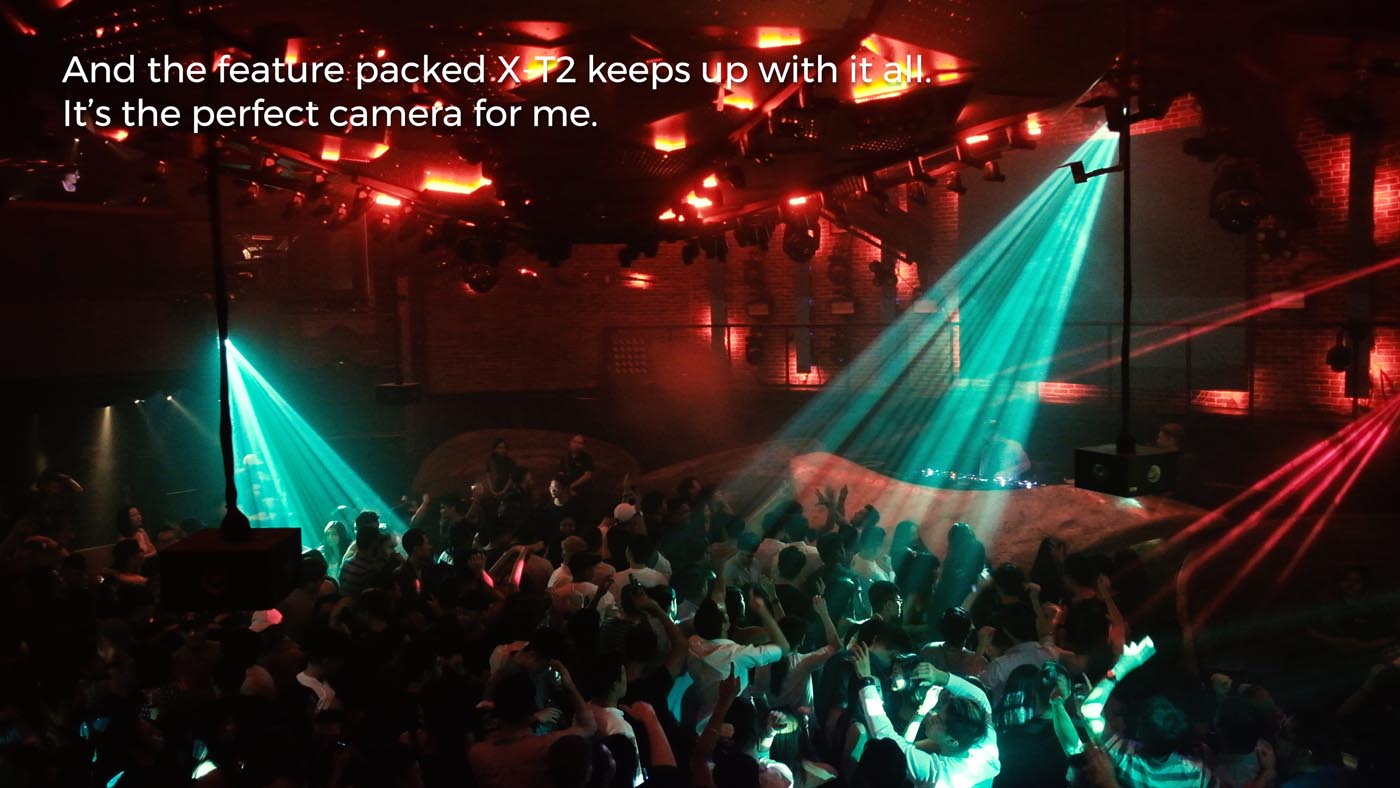 For more on the X-E3 video experience, head over here: http://charlenewinfred.com/2017/10/02/the-fujifilm-x-e3-a-really-lightweight-video-kit/

All images in this post are screen grabs of the final Dual Vision movie. Watch it here